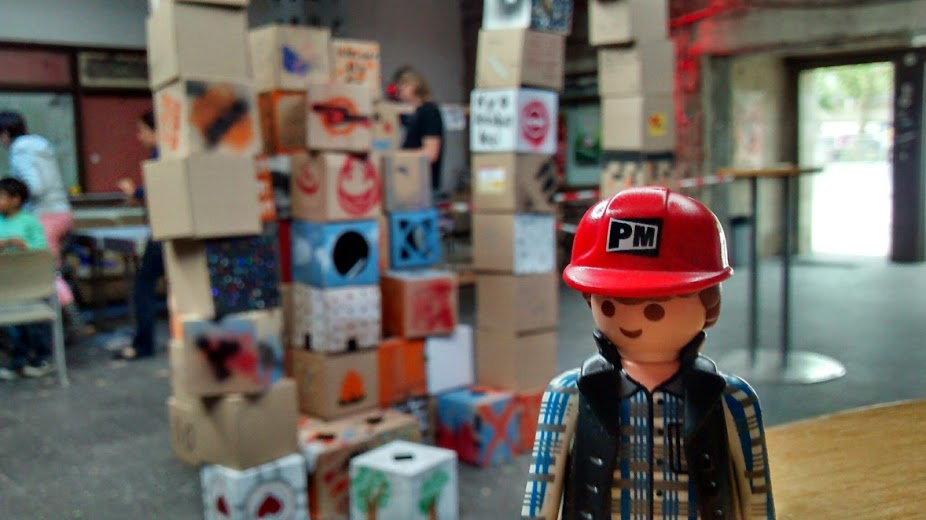 This was going to be one of my last rambles on makerspaces. But having started this post in Feb 2017, I haven’t been able to finish. A mysterious gravity keeps pulling me back to edit.

In July 2017 I moved temporarily from my permanent desk at DoES Liverpool as they consider their move to new premises having spent a good 4 years benefitting from my associations with DoES and from there, a wider maker-space/hackerspace community. From Public Engineering with DasLabor to numerous Minecraft flavoured projects like CloudMaker, RF-Craft, ShrimpCraft, Rail-RF-Craft and most recently the epic Milecastles project for DomesticScience.

Milecastles is an epic RFID driven Text Adventure game distributed across 15 bespoke game boxes built in DoES, running a bespoke micropython image with a bespoke game authoring system, AVATAP made with Cefn Hoile of Shrimping.it with Glenn Boulter, my colleague and co-founder of DomesticScience. The AVATAP authoring and interaction system is compressed onto ESP8266 boards with stories written in JSON in a pyglet authoring environment, following much co-design with DomesticScience and a team of curators at the Hadrian’s wall museums. I talked about it over these slides recently at Wuthering Bytes

Bottom line, I could not have made any of this happen without that workshop and desk in Hanover Street. But really it’s not just the desk, or the workshop; It would not have happened without engaging with the people that spin around the DoESLiverpool gravity well. When we say community or maker ‘anything’ we seem to suggest something homogenous; but actually it’s alot of very specific people doing very different things from very different backgrounds. What is homogenous are people with a huge generosity of time to help share knowledge. I’m poised on developing a major research and public engagement project with a university in collaboration with Domestic Science and this really takes everything I’ve learned from DoES and the maker thing and applies it to microbiology.

So what have I learned? I think it’s a certain flavour of sharing knowledge; It is the knowledge exchange talked about in larger research institutions, but it’s an informal kind of exchange that’s tricky to track; when you say “engaging people / learning through participation and making / collaborations across disciplines” these vague often overused statements and expectations are all things that happen but actually they all have a very personal specific note to them. Although Makerspaces love (and should) document their knowledge in a seemingly anonomous wiki, the exchange we are talking about is often about generous personalities. It’s also something you can’t just walk in and get off the shelf; the wiki does that to a degree; and so do the makernights, but to really get it you have to do some gardening. That is, you have to do some digging and planting: give up alot of personal time and be generous, flag up an issue and then try close it.

I’ve talked up the importance of maker culture alot, inspired by personally benefitting from this generosity. It’s also been an essential part of my art practice: a form of research and participation in the cultures that evolve around things like making, science and engineering. What I broadly call technical cultures. I use this phrase very broadly and I don’t just include the recent idea of makers, or things with a computer involved, but also the sciences generally and things like Amateur Radio, Planespotting, Amateur Astronomy, Model Boats and the Portable Antiquities Scheme. Generally as an artist I look at disciplines and interests that are NOT ART as a way to inform what art practice could be. In a way maker culture has been a recent phenomenon that has clear connections and in-roads to art practice and in a weird way for me, it’s like my research area made into a real social phenomenon. So it’s no surprise I’ve been involved in this.

I’ve also been involved with some brilliant formal research about makerspaces. So to pick up some pretentious astrophysics analogies, on top of the gardening ones: now I’m out at the Lagrange point of the DoES influence, working from home, I’ve tried to reflect on it all.

I’m not sure how representative DoES is really of maker culture and whether Im actually talking about DoES culture. When you get involved with any DoES community events, it certainly feels like a good fit to the definition of ‘Maker Culture’ at the various maker events they get involved in. Everyone at these events seems to be doing the generosity-of-knowledge-and-time thing. Getting involved with research into makerspaces’ impact on manufacturing made me realise that despite that, all of the makerspaces involved where actually very, very different things and had really diverse ambitions, interests, motivations and business models. You could not easily assess how that diversity could drive a transformation of manufacturing at scale for example.

I was considering drawing a line under this period of interest in maker culture because for someone who got interested in 2009 the maker ‘thing’ has been around for ages and many organisations and institutions are only now finally catching up. This might come across as staking some kind of arrogant critical claim (ok it is a little) but it’s more of an observation. That catching up process has been beneficial to individual makers and the wider community, in terms of work opportunities and community development. Many organisations and groups and individuals picked up on the value of it from the very beginning: a shift in how the so called creative industries could work; as an informal diverse community with no top-down designed strategic programme or innovation powerhouse, highly independent, productive and valuable. The ‘maker’ movement that’s still quite possibly not a movement.

In the best cases supportive people and organisations recognised the makerspace/hackspace thing as an emerged (not emerging) trend with real value and want everyone to share in that. At worst some still haven’t really noticed it, unintentionally sidelined it, copied it or have (unknowingly or otherwise) co-opted it into their existing raison d’etre to validate their place as innovative cultural bodies.

Engagement, research and innovation through doing in a community is clearly something that should be going on anyway everywhere but often isn’t, so pulling in makers or doing making type stuff can stimulate it, with little large scale investment but potentially a huge degree of benefit. To be generous, the organisations pulling in maker activity although slow to respond or not quite ‘getting it’, are overall doing a good thing and it’s helping more people get involved and through mainstreaming it, will hopefully make for a more diverse and vibrant community.

I keep thinking back to some conversations I had with Markus Brinkmann at Das Labor when we developed a great little exchange and partnership project with DoES and Das Labor, Public Engineering a much more ‘traditional’ hackerspace born out of a Chaos Communication Camp in the 2000s. Unbeknownst to me the marketing team supporting the project mis-translated some of my text and mis-intepreted a conversation which meant unrealisitic expectations where being generated and this had upset Das Labor more than I had realised, though they heroically supported every aspect of the project. I began to realise my lack of care and focus around the context of the project and support for those putting huge effort in, and the subsequent media and art narrative for it was having a serious potentially damaging affect on the community. I began to feel my artwork was feeding off a huge amount of good will, perhaps undeserved and for primarily my benefit. Markus generously overlooked this not just for my benefit but because he could see how much the community where benefitting from the thing they’d been dragged into. This benefit was on their terms I think, not due to the public exposure of the project and their community necessarily, but to do with them perhaps reflecting about their own resilience and what their relationship to other institutions could be. They did not require validation from other formally defined cultural bodies but their generosity and resilience in that situation may have consolidated validation on their own terms. I should really revisit those people and see whether it had any impact for them at all.

Basically I’d been a careless gardener; this sounds condescending, but I realised the delicate balance between exploitation and collaboration was way off and jeopardised the aims of the project, to make visible the networks of knowledge that exist in a place even if that place has lost it’s main employer or in Das Labor and Bochum’s case, their (car) manufacturing industry. Dangerously I may have put pressure on a community to make up shortcomings elsewhere that was never their responsibility.

That said I think we all entered the project knowing these pitfalls and overall the Das Labor people had a great time, with the key organisers doing amazing work and visiting other spaces in Eurupe like DoESLiverpool for the first time.

“People come for the equipment and stay for the people”

What people sometimes don’t really appreciate is that it’s not really about lasercutters, github, python or 3d printers. Anyone can have a lasercutter and then let people use it. What’s trickier is getting the people who use it to fix it and improve it and build on it and thats the Dark Matter of Maker Spaces @amcewen talks about. People get excited about the potential of accessible technology makerspaces make available and rightly so, but the dark matter is the important bit.

Would be great if you could box it up and make it happen anywhere. And really with some work you can. Essentially it’s just dogged enthusiasm and a dash of luck and timing that causes that gravity well of interested people and things. Like actual dark matter it’s hard to see and detect (and market or research) but it actually makes up the mass of everything and stops things flying away to nothing. Add a few opinionated slightly organised people with generous natures and thats your next astronomy analogy, the background radiation of makerspaces. That’s what generates the tangential, silly, serious and often philosophical conversations you could have in DoES while waiting for a cup of tea/coffee/water/lasercut or 3d print to complete; the real ‘life-world’ of makerspaces.

The main thing is participation and trust: from individuals then aggregating up to a larger affect in the community, and for my upcoming project, if it happens, I hope to make it work in the right way.

Signing off for the next wave

Perhaps we need some more accountable (if only on github) private and public organisations that are interested in a wider good and the model for them could be if not makerspaces or hackerspaces themselves then the entities and projects inspired by them. That’s what we are trying to do with Domestic Science and Critical Kits.

Meanwhile I hope more and more exciting things come flying out of the gravity wells of places like DoESLiverpool and all the other current and future parts of technical culture until I move back in to their new location. :)