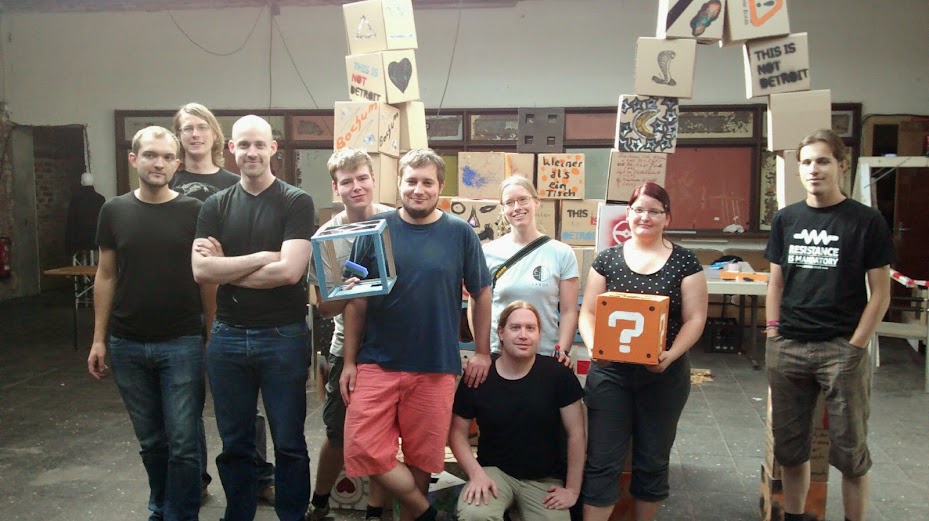 PUBLICENGINEERING is a response to Bochum in the Ruhr region of Germany losing a big part of its car industry, an Opel factory (owned by General Motors) while counterpart GM factories remain open like the one in Ellesmere Port near Liverpool.

Local cultural organisations Schauspielhaus Bochum and Urbane Kunst Ruhr in Bochum set up artistic projects in response to this, one of which they invited Ross Dalziel to develop through curator Paul Domela.

Its a way to place DasLabor on a local public platform and as a model for future independent social and economic practice. DasLabor already do social events like this but for PUBLICENGINEERING a specific collaborative event by Das Labor was setup based on an exchange between engineer in residence Patrick in DoESLiverpool the maker/co-working space Ross is based at and Kai & Laurenz from DasLabor.


The project although a simple celebration of DIY engineering and hackspace culture in the Ruhr region is really a low level entry into discussing strategies & resilient practices that retain & support technical knowledge and agency in a region that loses part of it’s predominant industry.

Large industrial changes cannot account for the impact on local communities and often the industry itself lacks real community engagement; it's simple not part of the accounting. Is it possible for neo-liberal economic impacts to be resisted and managed at a local level that works for peoples real lived experience?


Or is this the instrumentalising of neo-liberal capitalism itself, where all agency and so responsibility is placed on individuals rather than sprawling corporate structures that hold the key capital assets like fossil fuel and telecoms infrastructure.

In the face of this what agency can we foster in terms of the technical skills of a community that works in an industry when it suddenly shifts and collapses?


Hackerspace cultures are increasingly showing ways forward to the arts and humanities in terms of resilience and fostering agency through knowledge. Perhaps they only exist as an affect of globalisation; cheap access to the internet and components from china, a non-unionised yet self-organising, fragmented yet distributed workforce. Industrial relations in technical culture is complicated and difficult to map now, but nevertheless these often non-unionised technical communities find time and space to build and maintain tools and community with a vision of resilience and freedom.


They seem to point the way forward when much of 'arts' culture is now spectacle based tourism and some kind of counterpart to mainstream media journalism. Hackerspace culture has the tools and potential to modify how economies work as technology underpins the flow of capital. Perhaps this is the culture industry one that may affect real change to the inequality industrial 'business as usual' can cause.

Public Engineering reminds Bochum that technical cultures don't vanish when the employer does and may be the kind of grass roots community local government and economic planners need to invest in supporting and engaging rather than trickle down approaches to regional support when big business changes.

This is part of my work exploring an art practice that considers science and engineering to be a culture to critically participate in rather than a subject to speculate on and critique. As usual I'm humbled and inspired by all the people involved in these cultures. Das Labor's generosity has been incredible and will continue to have real positive impact well beyond the end of the festival. Urbane Kunst Ruhr and Schauspielhaus have been brilliant supporters and gave us the freedom we needed.

Thanks to Paul Domela who supported and understood the development and importance of this project.