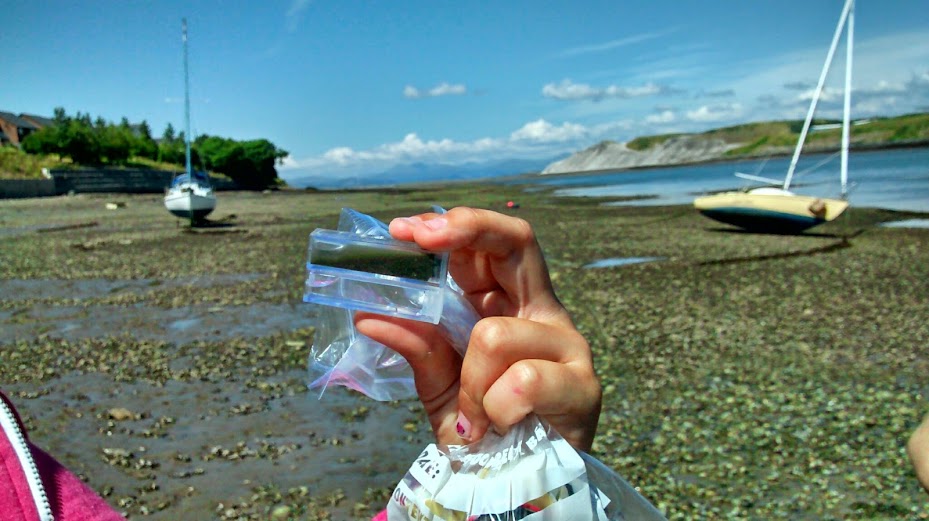 I’ve been working with Octopus Collective and Natural England to develop a project exploring Walney Island with Year 6 children from North Walney Primary School. It has developed from research with the Currently project which aims to get people to engage with the marine world in new ways across different disciplines from sailing, soap making and computer science.

Our approach was for the group to become co-researchers and assemble simple water sensors based on the Arduino platform and use them to explore their environment. As a school on an island the sea and Walney channel is a big part of their world. It would be an opportunity to build and test kits that the school and other schools in the area could use in the future and a way of building on some of the DIY electronics work Octopus have been pioneering in Barrow in Furness based in Piel View House in Barrow Park. We used shrimping.it to buy ‘shrimp core’ kits with Persistence Of Vision extender kits. Shrimping sell cheap kits and distribute free information on how to build Arduino compatible breadboards for prototyping: they are based locally in Morecambe (hence shrimp) and are all about getting people involved in making more accessible tools; to not just be consumers and be given tools but understand how to build them. You feel more connected to something you have built from components rather than just given a pre built Arduino. It also brings the kit cost down to £10 to make it an affordable project for a class to do.

The school is on an island so like much of Barrow there are strong links to the sea and we wanted to engage children with this environment through collecting artefacts; beachcombing basically, images and also collecting sound and editing together simple soundscapes. For my part of the project we wanted to connect to what you cant see or hear: the underlying data of the environment; what could a computer science take be on exploring the natural world?

I wanted the children to build their own 'computers’ and sensors and then visualise the data using simple LEDs flashing on the breadboard, a simple processing sketch and then draw graphs in minecraft on the FACT server at mc.fact.co.uk as its a space young people are very engaged with. Along the way I wanted to just introduce how you might go about making inferences from the data you collect in the environment; does a certain temperature and muddy water mean the water is healthy? Or do we need water full of useful stuff for animals to live in it? 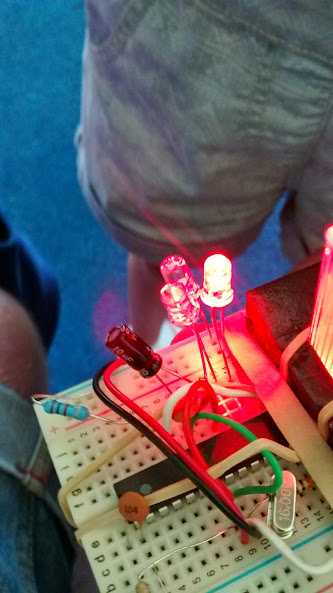 We made very simplistic Turbidity sensors by measuring how much light passed through test-tube samples, and then used DS1820 temperature sensors with the 1-Wire protocol. In the end we could not get the 1wire stuff working in time but we did get rough analog values that changed with temperature and flashed LEDs in sequence to represent a high or low value. The turbidity sensor was inspired by this brilliant Hackteria design 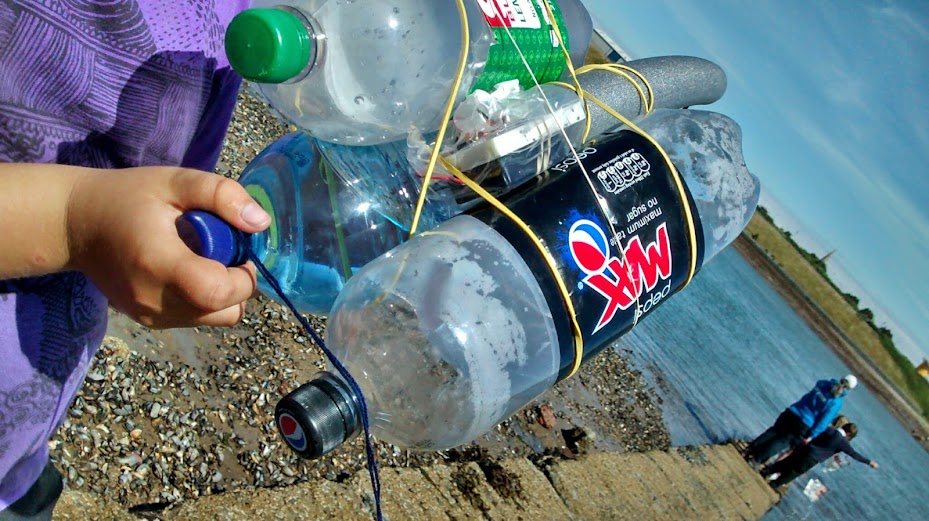 We then built rafts to launch out sensors onboard; which really made the sensors come alive

This was a pilot project; we had a lot of great feedback that we need to use to streamline the project: we need to make the shrimp assembly instructions easier and as handouts for everyone and could leave out a lot of components. We also need to incorporate the one-wire library into our code to make the temperature sensors read properly. And finally we need to make templates for recording temperature readings that we made with the flashers.

You can get the prototype pack of processing and python code, CP2102 USB drivers and instruction for shrimp kit assembly here. Theres also a lot of cross curriculum potential in here but it was the first time the school and looked at any technology that you built yourself: and that IT and computers don’t have to be software on Windows desktops. A result for me was the obvious delight in getting the arduinos working and calibrating the  flashing LED sequence 'language’: If you gave someone a small breadboard with a flashing LED they would not be impressed but because they’d built it from scratch and invested meaning and context into it, it had a massive impact!

The next step is to reproduce the workshop with the kits that our co-reseachers help develop for the Currently project at Liverpool Maritime Museum with National Museums Liverpool on Saturday 20th August 12 -4 pm with Adrian McEwen and Amanda Steggell. We will be adding some improvements and trying out some pH sensors and possibly some radio controlled sensors while also making 'LED throwies’ to do some morse code