I’ve been reflecting and reporting on the Arts Council England supported project Ok Sparks with Hwa Young Jung and Glenn Boulter, my major project for the past 2 years. Like all big research led projects they occupy alot of mental space but generate a range of new thinking and drive a huge amount of learning and interestingly, merge with other projects and other practice.

It’s rare to find collaborators that you can work easily with and whose work complements each other but our three part partnership turned out like that. We all decided we would use the project as a context to develop new work and new ways of working for us and eventually it evolved into a new organisation Domestic Science.

Ok Sparks explored the layers of history of the tenants of Wray Castle a victorian folly on Lake Windermere. Built in 1840 by Dr. Dawson, a retired surgeon from Liverpool and his wife, the mock-gothic fantasy castle also featured a walled garden, a church, double boathouse and fernery. The National Trust acquired the castle in 1929, and has since been home to the Freshwater Biological Association, the Merchant Navy to train radio officers as RMS Wray Castle, used as a conference centre and is now a family friendly visitor attraction.

Over 2015 - 2016 we developed and programmed a series of activity to explore the lesser known history of a special place in the Lake District with a unique role in the history of science and communication.

We pretty much threw everything we were interested in at the project: every tool and methodology at the edge of our capacity, skillset and knowledge. The idea of layers of history and inviting contemporary versions of that history back to the site held it all together: the diversity of the sites history reflected in the content and approach.

A mobile interactive story encouraging young people to explore the castle’s unique architecture and learn about some of it’s former inhabitants. Aimed at younger visitors (5-10), the game centred around a gentle ghost story including some simple freshwater biology and radio operating-themed puzzles. Players were quizzed on details from specific rooms in order to progress through the game

Open weekend reflecting on the past of the Merchant Navy at Wray Castle with Furness Amateur Radio Society (FARS) an active community who recently celebrated 100 years of Amateur Radio in Furness in 2013. Barrow Wireless Association was one of the first amateur radio clubs to be issued with a transmitting licence in the UK, on the 26th June 1913. Visitors experienced a special OFCOM licensed Wray Castle Radio station, call sign GB2WCR, played the Minecraft Treasure Hunt, met people from the original RMS Wray Castle, the Merchant Navy’s training college, played with morse code and learnt about the continued importance of radio culture in everything from the Internet Of Things, Minecraft and Mountain Rescue.

An introduction to freshwater biology with scientists from the Freshwater Biological Association. Vistors could Investigate the ecology of the Lakes with hands on activities about chemistry, algae, fish, invertebrates and explored the impact of the lake ecosystem and the role of limnology.

Special laser cut Minecraft blocks using the RF-Craft system were hidden around the castle venue: when found special low power radio modules send a message to a local Minecraft server on a Raspberry Pi with an RF-Craft receiver HAT to reveal hidden treasure and information about Wray Castle’s past.

The unique context of an isolated National Trust venue with no internet access pushed us to design an innovative radio messaging system with Patrick Fenner that added network resilience to the distribuiton and installation of the Minecraft Treasure Hunt.

We hope this could have future impact on the development of future interactive/augmented reality games and is a handy bit of hardware that bridges the gap between Raspberry Pi and Arduino on top of the ability to send packets of data over radio.

The basic treasure hunt game was designed to allow families to play and explore the castle together: The younger family members for example could hide the lasercut minecraft block butttons in the castle and then send the ‘grown-ups’ off looking for them while observing a local Minecraft Pi Edition Server in the exhibition room; once the blocks where found and the button pressed the server ( a Raspberry Pi with the RF-Craft HAT in receive mode) would respond by revealing secrets in text in the games, often teleporting the player to related gaem locations.

It became apparent that much more elaborate iterations of the game could take place as users quickly hit the game’s end as it was designed as a drop-in activity. Much of this part of the project was about the development of a system and tool for developing this kind of game and it became clear that it could trigger hooks and events in text adventures. The power of radio independent of WiFi opened up all kinds of possibilities. The difficulty is finding the right tools for the job and then the right well documented tools for the job with a thriving community of users of diverse technical ability.

RF-Craft is the most in depth development I’ve ever done to build tools to both serve and distribute elements of my artistic practice, something I first came across with the Owl Project and their Muio system, well before Arduino and maker cultures really got going and before easily accessible documented-for-newbies board culture fully emerged and certainly well before a ‘market’ existed like the one supporting companies like pimoroni

This research into what I see as contemporary radio culture, evolved from the hardware hacking, maker and HAM communities, acted as a social bridge to the more traditional radio and telecoms communities the Ok Sparks Open Weekend invited.

Technical people like technical things to discuss so we had strategically built a system that would act as a conversational honeypot so radio people’s technical curiosity merged with game enthusiasts, families and IoT researchers in a fun way.

Together with FACT’s CloudMaker project, we developed an RF-Craft v.2.0 for the use of teachers and other practitioners to teach the internet of things. 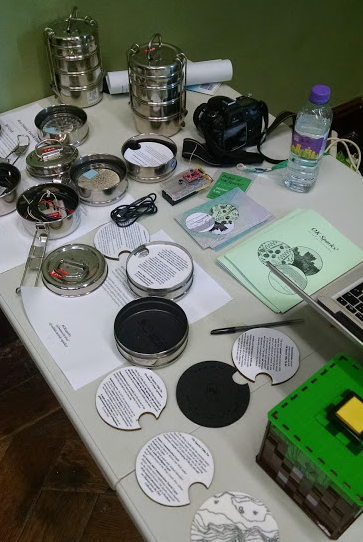 All three of us are drawn to lesser known stories and narratives in society & culture; and by culture I don’t just mean art, but technical and scientific cultures aswell. We all feel that the ubiquitous presence of information and technical culture in contemporary society warrants it’s consideration in any kind of artistic engagement, so much of our work engages in technology somehow. By this I don’t mean artists should all be making apps or Processing animations and to abandon traditional craft for 3D printing, but to acknowledge that the default artistic pallette is changing. I tried to look at some of these changes through making a text adventure about Walter Benjamin.

The artist with an interest in technical culture has to tread carefully especially when doing it outside the protection of high end art galleries and museums, but in heritage sites with minimal technical infrastructure.

There’s always a danger for artists to simply re-present something from the world of science and engineering and use it to show some kind of speculative danger or profundity. The other danger is that you could become an evangelical maker, science communicator, or a re-seller of microcontrollers. Technology’s increasing colonisation of every part of human life has been described as a form of militarization of culture and there are few practices that allow you to explore this; or really question how we live in such a society and how we could benefit from it without it allowing others to control us.

For me art is a practice in flux and unclear of it’s role; it’s often seen as an alternative practice, an experimental one or a waste of time; or it’s the only way to learn, be healthy, fix society or promote social cohesion or transcend reality. This lack of clarity opens up more possibilities than say, the mainstream media ever could, and indeed have resolutely failed to achieve. I’d go with it as a form of exploration and reflection, actively resisting the dangerous easy soundbite. Art is more of a dialogue but a critical one that is nuanced and aware of context.

Perhaps a good explanatory story of why an artist is interested in science, which Hwa Young pointed out to me, is the history of the term scientist which was coined by science historian William Whewell in 1833 in response to comments from members of the British Association for the Advancement of Science and then seriously proposed in his Philosophy of The Inductive Sciences in 1840.

It would be decades before it became common parlance and alongside the establishment of the scientific method and ever more specialised fields or study, art and science increasingly drifted apart when really they’ve always been close and at their heart truly about the study of Natural Philosophy

Based in a major tourist attraction we wanted to question the prevailing narrative of what the lakes heritage was; it’s worthwhile to tell the story of Beatrix Potter’s time at Wray Castle and indeed her importance to The National Trust; but our role was to reveal a hidden richness of innovation and the open sharing of knowledge through the previous tenants of the Merchant Navy and Freshwater Biological Association, which we only discovered the more we talked to staff and local people. However we wanted to present it as informally and as family friendly as all the existing material at the site already did; so our radio culture trade fair open day was amongst the childrens foam play area and access to a Limnology 101 was a science meal deal, freshwater science and tea and cake for £4.50.

And really that’s where domestic science comes in; clearly a reference to what was deemed domestically relevant in the 1970’s and aimed mainly at girls, we wanted to re-think what science and history of science is domestically relevant now. It’s no longer just flour and water ratios for the ideal pudding: it’s internet security and safety playing Minecraft, it’s unearthing your parents memory of text based computer games, or being aware of the tiny animals that live in the rivers running past us as indicators of a healthy ecosystem or the variations in climate that can lead to flooding or understanding webserver infrastructure, the internet of things or how much you can learn by making a board game.

In any report to a funder or your own self-referential blog you must sell the successes of the project and it’s legacy and try to get across the nature of participants experience. Looking at our photostream goes a way to doing that but capturing conversations we had with hundreds of people over 2 weekends is harder. What we can say is that we developed new ways for us to articulate what our practices really are and then to develop tools that we can use in the future at different places with different histories and presents to reveal.

We have done it in a way that is informed by technology not just because its there and it’s been sold to us but because it reflects the nature of the place and more importantly the people somehow. There is a space for popular science on TV and big names in the cultural canon but it’s equally valuable and part of our hertiage to find off the beaten track tools, like lesser used radio spectra, interactive ficiton, board games and a good old fashioned workshop with microscopes in a pop up lab in a victorian folly to discover and understand un-popular science and the people who support it across gender, class and nationality.

You can read our individual approaches to each part of the project here; Glenn’s, Hwa Young’s and mine 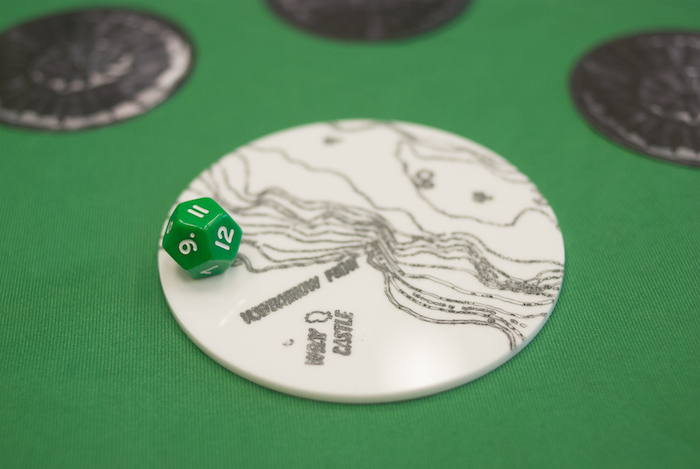