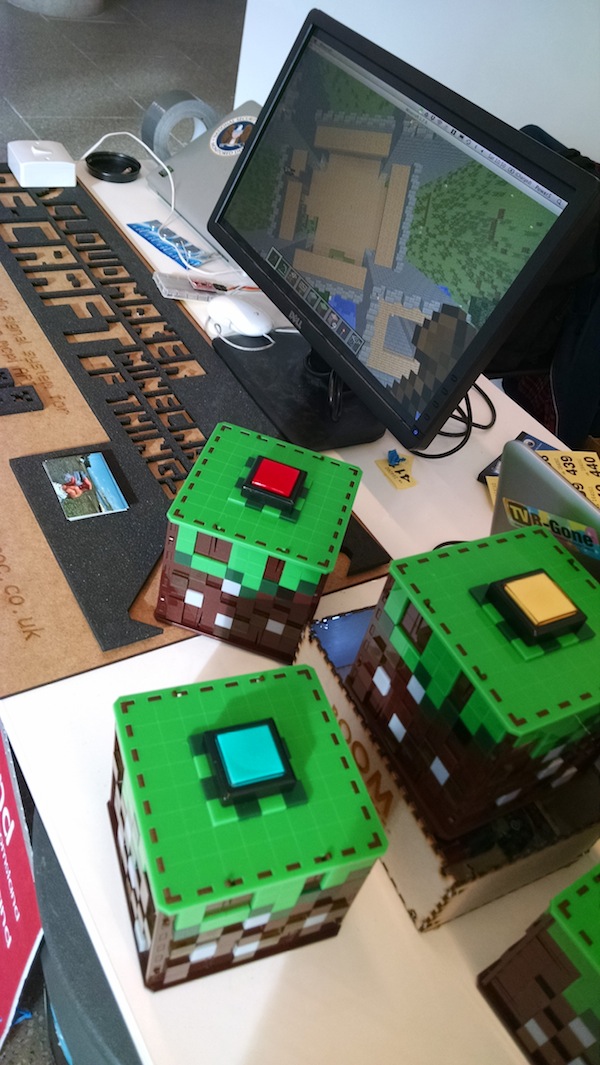 This weekend I tested RF-Craft an open hardware (mostly) Radio messaging system for my part of OK Sparks! using the unlicensed frequency 868MHz designed and made with DefProc as part of DoES Liverpool’s stand at OGGCAMP15.

RF-Craft is a prototype Raspberry Pi HAT (Hardware Attached on Top) and arduino clone to send mcpi API commands to a minecraft server and especially the CloudMaker server. CloudMaker initiated the project and will be rolling out something similar soon with example resources like this and custom distros like this

As usual Oggcamp for me was a space for discussing ideas around technology in a social way and I had an interesting discussion with Hwa Young and some Oggcamp big data analytic people about ideas around Data Literacy, makers re-making sensors and more generally designing learning and thinking around the internet of things

I’ve avoided the term teaching there: I’m not a teacher but an ‘educator’ of sorts: my work is about devising collaboration that involves learning and sharing knowledge. That’s not really a cop out (honest!) it’s just trying to define what I do better. Teachers have a defined role and a clear methodology and real quantifiable outputs. I setup social situations that explore learning in a looser way; the methodology is in flux and dependent on context (people and place) and I hope that forms real but subtle nuanced contextual relationships to knowledge. But that’s then framed as a form of art practice. I see taking part in OGGCAMP15 as not just research or networking; it’s more and more part of my practice to support and take part in an informal, sustainable, independent and real knowledge ecosystem.

What I’m essentially excited about is that you learn differently from real people using their knowledge ‘live’. Being in the place where people are working helps you really become literate in what they ‘know’. The social is a massive part of learning. This is obvious. It’s not about dumbing down to make things easier.

Don’t get me wrong there is knowledge that can only be developed by sitting down and formerly learning: ie reading on your own and concentrating and there is much in culture (educational culture or otherwise) that seems to be trying to obliterate that. I worry sometimes that I’m contributing to this; but trying to make everything more ‘engaging’ and accessible should not necessarily make it ‘easier’. Making & testing to quote @saybeano, ‘all of the things’ is hard and it takes time.

I’m often reminded of Marcus Brinkmann talking about learning and his PhD; “It was the hardest thing I’ve ever done” despite his seeming ease with his knowledge. Learning and making is hard but it’s worth it: and doing that with other people from diverse disciplines and backgrounds helps no end.

My early use of breadboard arduino water sensors which I showed at the last Oggcamp ShrimpCraft was really a nod to participate in some sort of citizen science and an attempt to learn basic principles of collecting & visualising data and the Internet of Things by making. However reflecting on what I may have learnt since: it was pretty clear I’ve not built much more sophisticated sensors or am doing anything more complex with the data. I’m also not really engaging publishing and doing fascinating complex analyses and critiques of ‘big data’ yet, although one might think that would be the logical extension of an artist and technologist looking at the Internet of Things.

But I am clearer about what data can be and it’s use or non-use and that there are many assumptions made about collecting data and ‘publishing’ it and so on to ‘teaching’ it. Makes me reflect on the things James Bridle has written about and the work of people like Daniel J Levitin who pointed out some good links like this.

If anything I’m promoting the idea of making ‘small data first’: and that almost all of my work is about situations that create forms of literacy or a degree of comfortable curiosity around a subject like IoT. And I think from simple steps you can point to the more complex. Further, these small steps of literacy is achieved best with the communities and ecologies that inevitably grow around that knowledge and information.

We know there are concerns in education around the digital: creative/design/IoT/big data technical skill-gaps out there and I’d like my projects like CloudMaker, Currently, PublicEngineering and even Text Adventure Time to become utilities that address this.

What kicked off this reflective mood was catalysed by meeting Derek & the folks at Southport & District Amateur Radio Club (SADARC) Amateur Radio group 11 years after meeting them as part of a supporting audio training project I led for FACT & Felix Kubin in a school in Croxteth.

This was back when I was mostly known for doing and supporting sound based artistic practice with SoundNetwork. Meeting them again we realised it really made sense to think about the Ok Sparks! project with Hwa Young and Glenn Boulter as an opportunity for the public to meet radio communication experts like Derek and re-think ideas of what heritage can be in the Lake District: for every Beatrix Potter story there is one about the history of service and the use of Near Vertical Incidence Skywave (NVIS) radio propogation in local mountain rescue.

And after talking about OK Sparks!, SADARC are going to start meeting at DoESLiverpool next year: and that’s the beauty of ecosystems: they can grow and interconnect. Derek shared his feelings that the club really enjoyed coming to Oggcamp to connect to a wider group of people who they had a perhaps unsurprising kinship with. They’d been watching the emergence of the maker meme for a good while; they were especially interested in the public/family friendly nature of events that were easily as technically specialised as their own.

In many ways they felt that they were the original makers; independent tinkerers and custodians of often open-source technical knowledge put into practice but perhaps forgotten about. And the social ‘educational’ glue of Oggcamp means a makerspace/co-working space can pull in new people and connect to another long standing knowledge network like SADARC

Taking part and giving time to social things like Oggcamp Liverpool MakeFest , DoESLiverpool; the stuff ‘outside’ of work or formal education, the real social media of people and place, is an essential part of the literacy I’m interesed in.

It’s examples like this that make me wonder how we can design learning methods and social ‘systems’ that can develop a social data-literacy that I think can be found in the Dark Matter of Maker Spaces and at Oggcamp into an approach to address real skill-gaps in a ‘knowledge economy’ at scale.

There are examples out there, the recent reboot of Shrimping.it and the upcoming Code For Liverpool and, like most of the contributors to OGGCAMP to quote @lamdafu “Improving the world one bit at a time.”