Festivals and Fungal Hospitality: Deadwood is not Dead

Night of the Living Deadwood 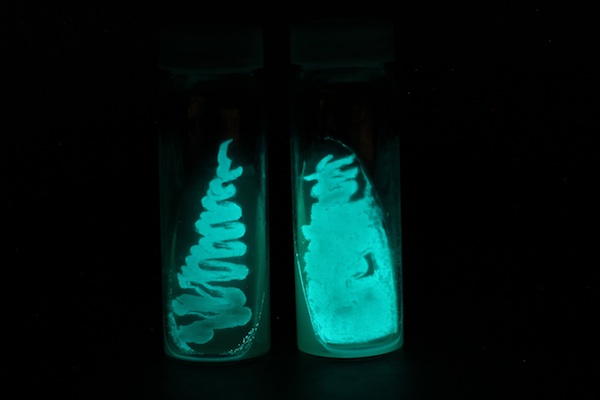 Spent the weekend at The Night of the Living Deadwood a workshop organised by AND Festival and Rod Dillon, Viv Dillon and Jackie Parry exploring the dynamic processes of fungal-tree relationships.

I visited Rod, Jackie and the Micro biology department back in July after applying to the project, to think about how Maker and Hackspace cultures and game cultures like Minecraft could be used as approaches to both public engagement and teaching micro biology and research areas like Biological Computation and Quorum Sensing 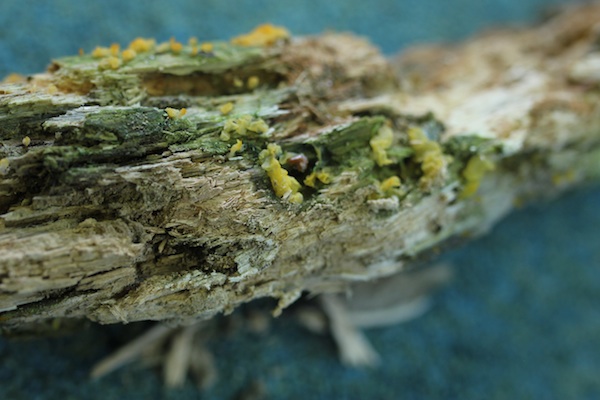 Our bodies are not our own: The convenience of language in the presence of god-like massive eco-systems

Im always amazed by how thinking of “My Body” and “A Tree” as distinct entities inadequatly describes what we really are; vast communities of multi and single cellular autonomous organisms changing communicating and reproducing over millenia and every second that we are alive (or dead).

The body and the forest: Fungal infrastructure

Slime Moulds are convenient organisms; they are prolific, hardy and easy to inoculate and culture. I liked Jackie Parry’s reply to the question “Why Slime Moulds?”, that it was probably just an easy thing to do and when other scientists saw it they all started using them. So they kind of seem to be like a biological prototyping and testing tool

The Rhizomatic Funghal network: The natural vector of these bacteria is in the forest and soil ecosystem: but when Rod showed us a packet of dehydrated funghi he bought on Amazon I wondered how human supply chains and the gardening shopping networks of Amazon and EBay are being used as new vectors for spreading and delivering DNA… 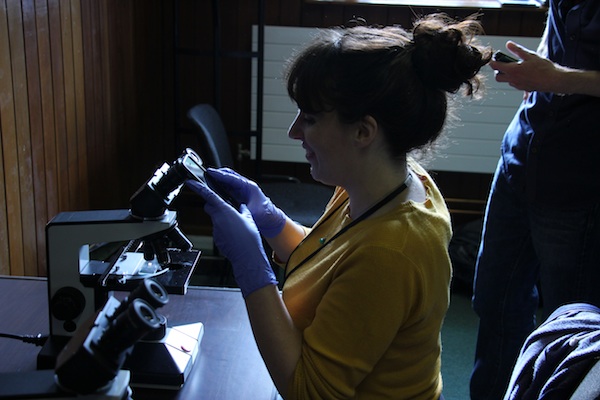 Is it useful to model these networks?

Check out the Typepad 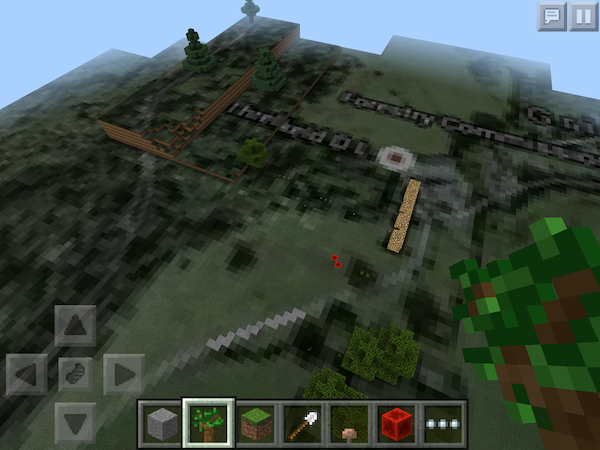 AND this year felt like a haven for exploring and thinking and making art with technology; but also about making it in the landscape and not just in the city and to deal with different scales. It echoed myself and Markus Brinkmann’s thinking around PublicEngineering of getting away from Festivals and labs and instead thinking about havens, springing from thinking about hackspaces as havens for knowledge and people.

Havens imply more sustained research and exploration and space for reflection/renewal; and to do this it needs time and that’s where festival formats can breakdown; yes they celebrate ongoing work and bring things to focus through an event but sometimes they find it harder to put resources into sustained fostering; in the non-event downtime research can happen and ongoing work can be supported but I cant help thinking that the logistics of the output-focussed costly event drives us away from a more sustainable ecosystem.

Deadwood was an exploration of how the granular texture of nature communicates; how information is distributed in micro biological systems; there are seasons and general shifts but there are no ‘events’ of particular import. There are no time frames: information moves and evolves but it is not necessarily ‘aware’ of time.

Complex vast communities of organisms like us have evolved to impose narratives on the continuum of biological time perhaps to deal with the consciousness of mortality: it drives us to compete for resources harder maybe and its worked pretty well to make us control much of the planet for better or worse.

But the tiny organisms are still in there; still ticking over relentlessly. Maybe working a bit more like a distributed ecosystem now that we have begun to understand them, is a way forward: the biggest tech powerhouses are disrupting everything through that, so I think art practice and science needs to be leaders in that and not just users of existing formats.

DeadWood was part of Rod and his department’s ongoing advocacy to open up his science community to diverse art & technical cultures and so its less about festival programming and more about ongoing conversations which feels much more organic. We probably first started talking back in 2010 and we’ve not run headlong into a project together (until recently, more on that soon) as often happens and I think that’s really valuable.

I’m reading into alot here but it’s based on a feeling that events take up so much logistical energy you can end up with barely any time to make work; it’s a problem for many artists like me that spend alot of time initiating projects and having to build contexts for their work where they can so a haven to reflect is essential as much as a strong studio practice.

Removed from the urban context once again makes me feel AND is a portal to a community of artists and technologists reflecting and building something; if we could have more continuous havens, then this can only get better. AND have more recently distributed their work across fields of research and activity and the north geographically so that it is a much looser thing and the festival in many ways is now just an important part of their practice, not it’s reason for existence.

Maybe thats the future of festivals; the festival format should be a tool for a community only, a tool to reveal the workings of havens of activity and ensure they foster & protect creativity not hide it in silos.

For me that’s the magic of things like hackerspaces; quietly making things with the occasional event, maybe, self-sustaining, independent, small but distributed widely, communicating but not necessarily aware of themselves all the time. 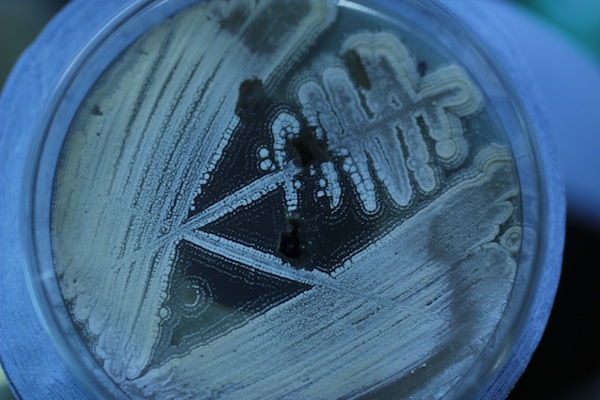 Started off day 2 getting embroiled in language issues; when we say ‘communicating’ in context of plant life its not quite the same as what we think of in the human world. As a group we started to acknowledge the semiotics of it all but I thought what was important about thinking of that; exactly how are we applying language and whether art is ‘beyond lanuguage’, is an awareness of the anthropocentric impulse and likewise the impulse to say ‘Oh slime mould is like an arduino or this Mycorrhizal fungi network is like the internet’

Clearly theres an area of philosophy to explore here for sure but there’s a danger that if you start to feel a clear philosophical framework is a requirement to give you a space to work in then it’s hard to get anywhere.

Jackie’s thought of a way to think of the difference in thinking of ‘communiciation’: describing a cloud appearing on the horizon as a packet of information you receive and respond to: “Oh its going to Rain”. Although you could receive it as information it does not mean it has been sent to you necessarily.

Ive been reading Teranesia by Greg Egan about a viral RNA protein that uses quantum inconsistencies in its structure to mutate and adapt across parrallel quantum histories in time; communicating across genetic timelines. It’s pretty out there but it also contains a surprising sustained rant about the real value to humanity and science of cultural theory and bio-semiotics. I think it has it’s place and it can be important but it also can be put to one side and not always necessary; its another tool. DeadWood felt like all kinds of thinking where welcome when normally specialised disciplines are neatly seperated and can rarely interact.

Thiago Hersan talked about making meditation tracks to feel the masses of bacterial communication in our bodies and relating it to the forest’s own information super-highway. And then we all took part in a meditation exercise prototype on the floor before learning how to take microscope pictures with Smartphones… I made a Pop-Up Minecraft:Pocket Edition server on an Android phone with bacterial microscopy images turned into landscapes you can explore in-game while physically exploring a forest.

I’m going to continue using game culture as a framework for exploring micro biology after discovering that Jackie Parry was making a simulation of Pac-Man with an amoeba, so I hope to collaborate with her on that in exchange for some 3D printed spores…