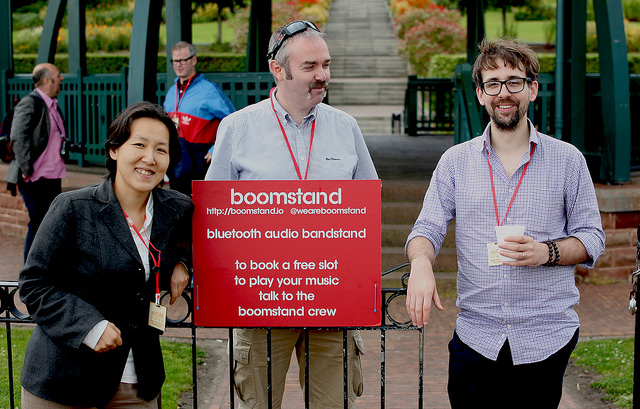 Spent a great weekend at Full Of Noises with the Boomstand crew connecting the Barrow-in-Furness Park bandstand to local passersby’s Bluetooth devices. Everything from 10cc, Sonic Youth and a mini festival of Donk was connected up despite dodgy weather. It was the first public test for the winning idea from Bring & Byte the music hack weekend I curated with The Hub UK.

It showed the public enthusiasm for playing their own music in a place they thought they knew well and I think for a festival like Full Of Noises who put on high quality intrnational, challenging sound and music based art that’s accessible to all it was a valuable public test. The idea of a self-managing online calendar and system to negotiate the use of a traditional public space for music is a great one and we had many interesting chats with locals and Ken the park keeper about managing and using the park and the tensions that can arise. It also has great potential for festival artists experimentation with audiences and the public.

The young people who passed by were incredibly excited to play their own music but you could see that the bangin’ hard house of Donk was not everyones cup of tea and immeadiately would set off the tensions often played out in public parks; older people sharing space with the very young and often very bored getting into trouble. Talking to them they were well up for using it but less keen on the control element or limited sessions obviously but were happy to drift off at the end of their session and come back later.

It looked like people more into music could potentially dominate everything but the whole idea is that the more people who use it the more its self curated. If we were in the park under normal circumstances we’d be pretty unlikely to talk to the group of ‘Donkers’: there is always an inescapable us and them at play; but because we had to take turns playing our music and theirs we were forced to engage to a degree; but the system meant that nobody was fully in control and I think that sort of ‘flattening’ of the us and them dynamic can only be a good thing and help people talk to each other about using their public spaces.

Clearly it could all devolve into a free form rave and possibly suddenly ended rave sessions with people in party mode could well set off potential problems for Ken and his team, but given enough diversity of users and ownership it could well be one of the most interesting public music engagement initiatives around.

The folks behind FON Festival Octopus Collective have always been keen to place music and sound not just to specialist audiences but to the public in both Barrow and Cumbria and engage with their local context through really successful public events in Barrow Park. They commissioned my own Crazy Golf Hack for SoundNetwork and in many ways their support still has an impact and legacy for my work today. Be interesting to see who else is up for hosting a Boomstand and maybe Barrow should be the first place to have a permanent install which could mean Octopus projects like FON Air could be playing in the park remotely at any time…

You can see images from the amazing festival here the sights and sounds of which still resonating in my head weeks after. A truly unique festival in a great part of the world.